If you still think a podiatrist’s only job is to take care of your granny’s corns and vulture-like nails, then you need to get with the times. To celebrate Foot Health Month, we’re shining a light on the fact that there is more to podiatry than feet.

University and clinically trained, a podiatrist is better considered a health professional with a particular interest in all things knee down – including maximising your running efficiency and managing sprains and fractures.

While a podiatrist will happily help you with your skin and nail health, there’s so much more a podiatrist can do. Podiatrists are trained in the assessment, diagnosis and management of acute and chronic injuries and conditions within the lower limbs and feet.

According to the Australian Podiatry Council, one in five Australians suffer foot pain. Additionally, this year’s Healthy Feet Survey reveals that almost half of Australians (48%) wake up with heel, arch or foot pain at least once a week, and an alarming 6 per cent of those surveyed said they experienced the condition every day.

Some other common conditions that we see in the clinic include:

Why should I have a podiatrist as part of my care team?

On top of this, our feet are our main point of contact with the ground.

We are using these extremely complicated structures to take on average 10,000 steps each and every day. With so many different moving parts in each foot and the amount of load they are exposed to, you can now see how problematic it could be if even just one or two of these many moving parts weren’t functioning properly.

The good news is, your podiatrist is skilled in figuring out which moving part isn’t pulling its weight and developing a treatment plan to ensure you return to normal function and fulfil your potential.

What do my feet have to do with the health of my hips or knees?

Because your feet are the only point of contact we have with the ground in regular movement and activity, if they are functioning inefficiently it can throw your whole body out of whack. 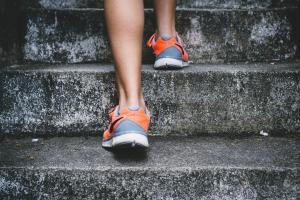 There’s plenty of research and work by anatomy experts that points to the interconnectedness of our body – perhaps no one more than Thomas W Myers, the originator of the Anatomy Trains Myofascial Meridians.

Myers’ work shows that the interior landscape of our bodies is intrinsically linked through fascia lines made up of cells, fibres and a liquid (or gel) he refers to as the extracellular matrix. These lines run from top to bottom (or is that bottom to top?), linking everything along the way.

With all the information available to us on how our body works, it would be naïve of us to consider one part of us, say our feet, as being separate to the rest of our body.

So, in order for our knees, hips and lower back to function properly, we need to ensure that the joints and muscles in our feet are strong, healthy and communicating efficiently with your brain.

If any of these muscles aren’t pulling their weight, then we have the ability to develop a strength and conditioning program to get them back to baseline and even improve on it.

If your feet still need a bit of extra assistance, we can create a custom foot orthotic to fit your specific needs.

What makes Podiatry at Upwell unique?

Upwell was created to change the way to way medical services, specifically allied health services, are delivered in Australia. Our vision is to help people who care about their health, to live their best life… and our pillars of innovation, collaboration and inspiration are deeply ingrained in every service offering. Specifically, for podiatry:

Innovation: Patients can access our NASA-designed anti-gravity treadmill for return to running and technique coaching.

Collaboration: Our podiatrists have access to other disciplines within the clinical setting including physiotherapy, exercise physiology, remedial massage, occupational therapy as well as yoga and pilates classes.

Inspiration: We offer Running Coaching and Assessments: Delivered 1:1 with a Podiatrist or an Exercise Physiologist. According to Sports Medicine Australia, up to 70% of recreational and competitive runners can sustain an injury in a 12-month period showing just how important it is to ensure everything is moving smoothly and efficiently.

What should I expect from a podiatry discovery session at Upwell?